Why is air cargo suddenly affordable relative to ocean shipping?

The cost to ship goods around the world by air is about 2.5 times more expensive than before the pandemic. On major trade lanes, where demand is especially high, such as China and Southeast Asia to the United States, rates are five or six times higher than normal for the peak shipping season.

So how has airfreight become a relative bargain when ocean shipping is cheaper?

The air rate from China to the U.S. West Coast during the first week of November was about $14 per kilogram, double what it was a year ago, according to the Freightos Air Index. Shipping by air to the East Coast cost about $13, also twice as much as in 2020.

We all know the reasons by now. Passenger aircraft are the source for more than half of air cargo’s global capacity, and most of them stopped flying when COVID started spreading and restricted travel. Fewer border restrictions this year have increased demand and helped start airlines toward recovery, but international air capacity is still about 70% below pre-crisis levels.

Meanwhile, demand, especially in North America, is at record levels as federal relief monies and higher savings rates gave people more disposable income, which they disproportionately spent on goods over services, while the manufacturing sector suffered dislocations and a lack of labor. Inventories have been unable to catch up.

Air is usually the mode of last resort, limited to perishables and high-value goods with margins that can cover the extra expense. Incredibly, airfreight has become a bargain relative to ocean shipping for many companies, especially when measured against the cost of stockouts and lost sales.

That’s what happens when supply chains are turned upside down by constant chaos.

Ocean shipping demand to North America is up more than 20% compared to 2019. Carriers and ports have been overwhelmed, resulting in huge delays and port backlogs demonstrated most clearly by the 80 container vessels waiting last week for a berth at the ports of Los Angeles and Long Beach. Glitches in the system — from COVID outbreaks to accidents — created more havoc because the system is so stretched.

Spot tariffs — for immediate transactions not subject to more favorable long-term contracts — can cost upwards of $20,000 for a forty-foot equivalent unit from China to the West Coast when a host of premiums and surcharges are included. That’s 10 times greater than pre-pandemic rates and doesn’t even include domestic transportation to move a shipment across the country.

Many companies, especially retailers worried about product shortages for big holiday shopping events, are trying to make up for lost time by shifting goods that normally move by ocean to air.

The decision to convert ocean freight to air is easier for shippers because air transport is much more cost-competitive than it has ever been.

Pre-pandemic, the average price to move air cargo was about 13 to 15 times higher than ocean, but now it is only three to five times more expensive, according to the International Air Transport Association and industry experts.

Here’s how IATA arrived at that estimate. 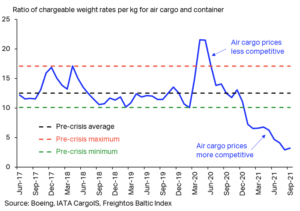 , which measures spot market tariffs plus surcharges per FEU of chargeable weight. Assuming one FEU is equal to 9,000 kilograms allows them to translate container rates into a price per kilogram and compare them with data for air cargo fares per kilogram of chargeable weight that is visible in IATA’s in-house system CargoIS. The data comes from millions of airway bills processed by IATA’s cargo account settlement system and information submitted by airlines.