Maersk Tankers A/S is resetting its business model as it tries to navigate volatile energy markets that are sending earnings in the oil products shipping sector on a tumultuous ride.

The company is offloading dozens of product tankers into a shared pool arrangement and transferring their ownership to a separate entity as it seeks to move from operating its own ships to a potentially more stable business of managing tanker fleets.

“We have fully changed our business from a typical tanker owner to a service provider,” said Christian Ingerslev, the company’s chief executive. “When markets are weak, we provide owners better risk management and more flexibility.”

Tanker earnings have had the sharpest swings in the shipping industry over the past year, with daily freight rates gyrating between $10,000 and $150,000. A steep decline in oil prices earlier this spring on the back of falling demand because of coronavirus-driven lockdowns saw around 12% of the world tanker fleet turned into floating storage for crude or refined oil products such as gasoline, according to Mr. Ingerslev and other tanker executives.

Demand for tankers is dissipating, however, as oil prices rise and governments start using record high oil reserves, which will cut down on tanker sailings or their use as floating storage, with earnings retreating as a result.

The market turmoil has buffeted energy transportation operations that traditionally have been built on long-term arrangements known as time charters, a model that provided tanker owners steady earnings.

Tanker owners say that around two-thirds of the global fleet is now in the spot market, with renewals of time charters increasingly rare when contracts expire. 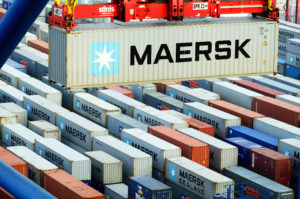 “Owners are now forced into the spot market and that’s not easy, especially if you are a smaller player,” Mr. Ingerslev said. “It involves a lot of risk in getting access to spot cargoes and whether your ships will be in the right market at the right time.”

Big tanker operators say ship management has become increasingly challenging. The U.S. has blacklisted ships for allegedly moving crude and oil products such as gasoline, diesel and aviation fuel from sanctioned countries that include Iran and Venezuela.

“We got eight tankers and put them in a pool for peace of mind,” said a Greek owner, who asked not to be named. “Things can change from one day to the other, and your ship can get blacklisted while en route. We can’t take such risks, and big ship managers have the resources to minimize them while keeping your ship employed.”

Maersk Tankers manages 224 vessels, up from 164 in 2018, with big companies like Cargill Inc. and Team Tankers International Ltd. joining its ship pools, The company made a $17 million profit last year, up from a loss of $14 million in 2018.

The switch from owner to ship manager began in 2017 when the Danish parent company A.P. Moller-Maersk A/S turned over control of its tanker business to A.P. Moller Holding A/S, its biggest investor, to focus on its container shipping and logistics business.

Maersk Tankers has since put its 84 owned ships in pools and transferred ownership to a new entity called Maersk Product Tankers, which is jointly owned by A.P. Moller Holding and Japanese trading company Mitsui & Co.

“There is too much oil stored for consumption, and that’s bad news for tanker earnings over the next year to 18 months,” said Peter Sand, chief shipping analyst at industry trade body Bimco. “Owners prefer to put their ships in a pool when times are hard. It’s a safer bet to have your fleet managed by a player with global reach.”